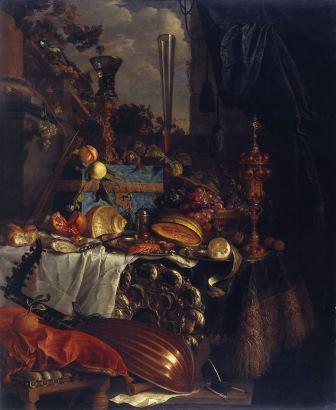 THE HAGUE, 24 May 2019 – The Restitutions Committee has advised the Minister of Education, Culture and Science to restitute two paintings in the Netherlands Art Property Collection to the heirs of the original Jewish owner Jacob Lierens. The Minister has accepted this advice.

The Netherlands Art Property Collection (NK collection) comprises artworks that were returned after the Second World War and were taken into the custody of the Dutch State with the express instruction to return them – if possible – to the rightful claimants or their heirs.

In 2017 heirs of Jacob Lierens asked the Minister of Education, Culture and Science to restitute two paintings from the NK collection. They are Banquet Scene with Musicians and Shuffle Board Players in an Interior by Dirck Franchoisz Hals and Dirck van Delen (on loan to the Frans Hals Museum in Haarlem) and Still Life with Glass, Glass Stand and Musical Instruments by Jan Davidsz de Heem (on loan to the Centraal Museum, Utrecht). The Minister asked the Restitutions Committee to advise her with regard to this application.

The Restitutions Committee concluded on the basis of the investigation conducted in this case that both paintings were the property of Jacob Lierens, who put them up for sale by auction in October 1941. The sale of artworks by a private Jewish individual during the German occupation is considered to be a forced sale, unless the facts expressly show otherwise. The Committee concluded that no such facts emerged in this case.

In accordance with current government policy, the Committee advised about this restitution application on the basis of the yardsticks of reasonableness and fairness. This includes the option of involving all relevant interests in the assessment of the case. If, as in this case, a claim concerns paintings in the NK collection, however, it is reasonable and fair not to conduct further weighing up of interests. On the grounds of the demonstrated ownership rights and the involuntary nature of the sale, the Committee advised the Minister to restitute both paintings to Lierens’s heirs.

The Advisory Committee on the Assessment of Restitution Applications for Items of Cultural Value and the Second World War advises about claims to items of cultural value lost during the Nazi period, also referred to as looted art. Since the Restitutions Committee was established in 2002 it has issued 158 recommendations and opinions and has had 180 claims submitted to it. The Committee is chaired by Fred Hammerstein.

The Restitutions Committee has advised Minister of Education, Culture and Science Jet Bussemaker to restitute to the Jewish owner's heir two paintings that were sold involuntarily during the Second World War.

The Restitutions Committee has advised the Minister for Education, Culture and Science (OCW) Jet Bussemaker to return three ceramic dishes from the National Art Collection to the daughter of the Jewish owner.