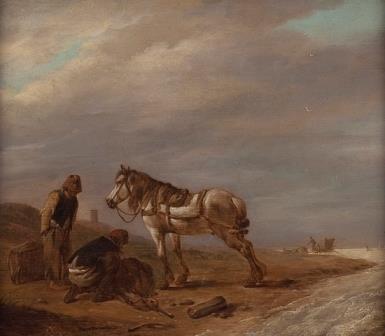 NK 3749 - Two Men with a Horse on the Beach by Philips Wouwerman (photo: RCE)

THE HAGUE – The Dutch Restitutions Committee has advised Jet Bussemaker to restitute three paintings from the Dutch State Collection to the heirs of Jewish art dealer Jacques Goudstikker. The Minister has accepted the advice.

The recommendation concerns the Dutch Golden Age paintings Two Men with a Horse on the Beach by Philips Wouwerman, Boy with a Dog by Dominicus van Tol and A Man With a Glass of Wine by Hendrik Gerritsz. Pot. At the beginning of the Second World War these works were part of the trading stock of the Amsterdam gallery J. Goudstikker N.V., which at that time was one of the most important art dealerships in the Netherlands. After the Jewish proprietor Jacques Goudstikker had fled the Netherlands in May 1940, his staff sold the entire trading stock and the firm’s real estate to the Nazi kingpin Hermann Göring and the German businessman Alois Miedl.

The three paintings concerned were sold and delivered by the staff to Göring. Later on the works ended up in the possession of a German industrialist. After that they became part of the collection of the Museum der Bildenden Kunste in Leipzig. As a result of Dutch claims, the three paintings were finally returned by Germany to the Netherlands on 4 March 2012. They then became part of the Dutch National Art Collection.

The Advisory Committee on the Assessment of Restitution Applications for Items of Cultural Value and the Second World War advises about claims to items of cultural value lost during the Nazi period, also referred to as Nazi looted art. Since the Restitutions Committee was established in 2002 it has issued 126 recommendations and has had 139 claims submitted to it.

The Restitutions Committee has advised the Minister of Education, Culture and Science to reject two claims to a painting by Claes Nicolaesz Moeyaert.

Read more Over Rejection of two claims to Moeyaert painting

The Restitutions Committee has issued a binding opinion about a claim to a painting in Museum Het Valkhof in Nijmegen. The work concerned is a seventeenth-century panel by Christiaen Coeuershof depicting ‘The Riddle of Nijmegen’.

The Restitutions Committee has advised Minister of Education, Culture and Science Jet Bussemaker to restitute a portrait by Tischbein from the Dutch National Art Collection to the heirs of the original Polish owner Count August Krasicki.

Read more Over Portrait Polish officer to go back to family