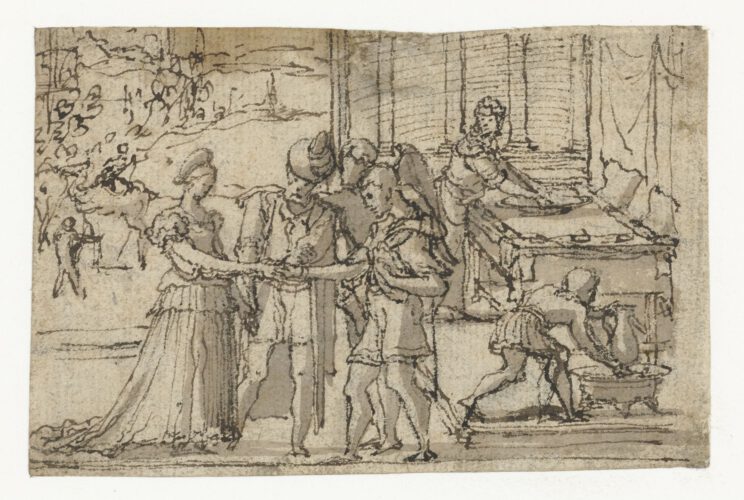 drawing The Marriage of Tobias and Sara by Coecke van Aelst (photo: RMA)

THE HAGUE, 25 August 2022 – The Restitutions Committee has advised the State Secretary for Culture and Media to restitute the drawing The Marriage of Tobias and Sara by the artist Pieter Coecke van Aelst to the heirs of Arthur Feldmann (1877-1941). Recent research by the Expert Centre Restitution (ECR) has shown that it is sufficiently plausible that Feldmann lost possession of the drawing involuntarily on 15 March 1939, the day on which Germany invaded Czechoslovakia. The drawing was purchased by the Rijksmuseum Amsterdam in 1964.

Research and witness statements have established that on the day Germany invaded Czechoslovakia, 15 March 1939, the Gestapo forced their way into the Feldmann family’s large detached home in Brno and confiscated all the family’s possessions, including the art collection. After the Second World War the Coecke van Aelst drawing was put up for sale by auction at Sotheby & Co in London in 1946. During its investigation, the ECR examined four annotated copies of the Sotheby & Co’s sale catalogue accompanying the auction in London in 1946. Three well-known art historians and a reputable art dealer noted in them that the drawing had belonged to the Feldman Collection. The notes on the back of the drawing are a further important indication that the drawing was in his collection. These notes are very probably in Arthur Feldmann’s handwriting, as emerges from an explanatory note in the report by the Protection Worthiness Assessment Committee (TCB), which was asked to advise by the Cultural Heritage Agency of the Netherlands (RCE).

In 1946 the drawing was offered for sale by the firm Bennett & Bennett, established on the Channel Islands, together with various other works, which had been established previously as having been looted from the Feldmann Collection. Recent research has shown that the Channel Islands, occupied by the Nazis during and also after the Second World War, was known as a transit point for looted art. These circumstances and the facts referred to earlier have made it sufficiently plausible for the Restitutions Committee that Arthur Feldmann lost possession of the drawing by Coecke van Aelst involuntarily as a result of circumstances directly connected with the Nazi regime. After undergoing a number of ownership changes, the drawing was purchased by the Rijksmuseum Amsterdam in 1964.

The State Secretary for Culture and Media has adopted the Restitutions Committee’s advice and will restitute the drawing The Marriage of Tobias and Sara by Coecke van Aelst to the heirs of Arthur Feldmann.

Relevant recommendation and summary: Feldmann (II)
Related recommendation: Drawing by Hendrick Goltzius on the back of a playing card

The Restitutions Committee has advised Minister of Education, Culture and Science Ingrid van Engelshoven to restitute a pastel drawing from the Dutch National Art Collection to the heirs of the original owners. The Minister has accepted this recommendation.

The Restitutions Committee has issued a recommendation to the State Secretary for Education, Culture and Science concerning five claims to looted works of art. The recommendation advises that three claims be granted and two be rejected.