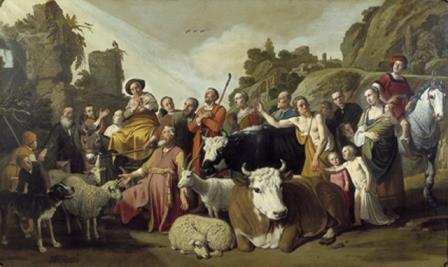 THE HAGUE, 21 July 2016 – The Restitutions Committee has advised the Minister of Education, Culture and Science to reject two claims to a painting by Claes Nicolaesz Moeyaert. Both recommendations have been adopted by the Minister.

The painting God Appears to Abraham at Shechem by Moeyaert is part of the Netherlands Art Property collection and is presently in Museum Catharijneconvent in Utrecht, where it is part of the permanent exhibition of biblical paintings from the Golden Age. The restitution of the painting was requested by heirs of Siegfried Granaat as well as an heir of Gustaaf Hamburger

It emerged from the Committee’s investigation that in 1941 it was seized by Dienststelle Mühlmann (Mühlmann Agency) in the home of Siegfried Granaat for the Führer Museum in Linz. Granaat had fled to England in 1940. Although the painting was in his residence at the moment it was confiscated, Granaat was at that time no longer the owner. Granaat had sold the painting in 1930 to the bank Hamburger & Co Bankierskantoor. In 1936 the bank sold the work to the art dealer Herman Hamburger, an uncle of Gustaaf Hamburger. After that Granaat held it in safekeeping for Herman Hamburger. Although a number of stolen paintings from Herman Hamburger’s collection were handed over to Gustaaf Hamburger after the war, in most cases this was done with the permission of Herman’s son.

The Committee therefore concludes that it is not sufficiently plausible that the painting by Moeyaert was the property of Siegfried Granaat or of Gustaaf Hamburger at the time that possession was lost in 1941. The Committee has consequently advised the Minister to reject the claims of the heirs of Siegfried Granaat and the heir of Gustaaf Hamburger.

The Advisory Committee on the Assessment of Restitution Applications for Items of Cultural Value and the Second World War advises about claims to items of cultural value lost during the Nazi period, also referred to as looted art. Since the Restitutions Committee was established in 2002 it has issued 144 recommendations and has had 164 claims submitted to it.

The Restitutions Committee has advised the State Secretary for Culture and Media to grant the application for restitution of the drawing The Marriage of Tobias and Sara by Pieter Coecke van Aelst.

The Restitutions Committee has issued a recommendation to the State Secretary for Education, Culture and Science concerning five claims to looted works of art. The recommendation advises that three claims be granted and two be rejected.