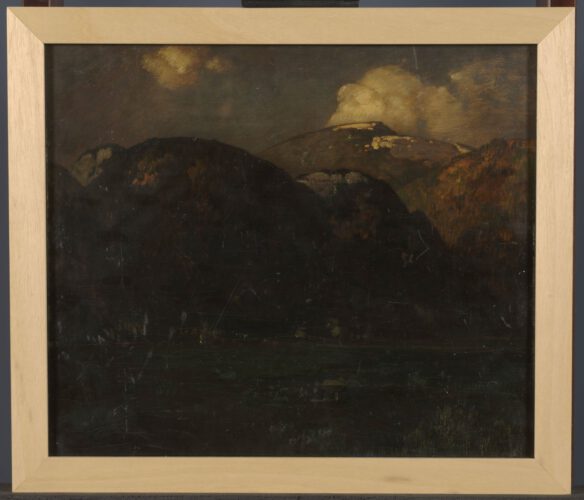 THE HAGUE, 30 December 2021 – The Restitutions Committee is recommending restitution of two paintings by the artist A. von Stadler to Isay’s Jewish heirs on the grounds of new facts. Advice to that end was issued after the heirs’ application was reassessed in the light of new evidence in an archive in the Jewish Museum that was unknown until recently. Subsequent new research has established that the then owner of the artworks, Alfred Isay, lost possession of them involuntarily as a result of the Nazi regime in the Second World War. The Minister of Education, Culture and Science has adopted the advice. The two artworks will be returned to the heirs.

In 2009 Adelsberger’s heirs, including Isay’s heirs, submitted an application for the restitution of two paintings by the artist Von Stadler (1850-1917). The application was rejected at the time because the ownership and circumstances of the loss of possession had not been established sufficiently clearly. An Adelsberger family archive, containing documents about the family and about the sale of the paintings during the 1933-1945 period, was found in the Jewish Museum. The heirs were told about it. The Adelsberger heirs supplemented this information with their own additional documents and submitted these facts to the Restitutions Committee as grounds for reassessing the restitution application. According to the Committee, these new facts provided a sufficient basis to handle the request for reassessment substantively.

After an investigation, the Committee concluded it is highly likely that Alfred Isay, Abraham Adelsberger’s son-in-law, was the owner of the two paintings by Von Stadler at the moment possession was lost in November 1941. The Committee also considers it sufficiently plausible that Isay, who because of his Jewish background belonged to a persecuted population group, lost possession of these artworks involuntarily on 13 November 1941 as a result of circumstances directly related to the Nazi regime. It was on this date that – through intermediation by one of Isay’s friendly contacts – the paintings were purchased by Kunsthandel voorheen J. Goudstikker, which was managed by the German Alois Miedl.

Abraham Adelsberger (1863-1940) was a successful German-Jewish businessman. He owned a mansion in Neurenberg and a large art collection, including the Von Stadler paintings. After the Nazis came to power in 1933, circumstances for Adelsberger and his wife became more and more dire and they fled to Amsterdam. As a consequence of his financial problems, Adelsberger had earlier conducted a legal transaction with his son-in-law Alfred Isay (1885-1948). It resulted in Isay becoming owner of part of the art collection, including the two paintings by Von Stadler. In 1934 Isay took these works with him when he fled to Amsterdam, where he later involuntarily lost possession of them.

The applicant and the chair of the Restitutions Committee are open to media requests.

Fourteen Items from Meissen Service Back to Heirs of Jewish Owner

The Restitutions Committee has advised Minister of Education, Culture and Science to restitute fourteen items from a Meissen service to the heirs of the original German owner Herbert Gutmann.

The Restitutions Committee has advised Minister of Education, Culture and Science Jet Bussemaker to let an earlier decision to reject the Koenigs claim stand.