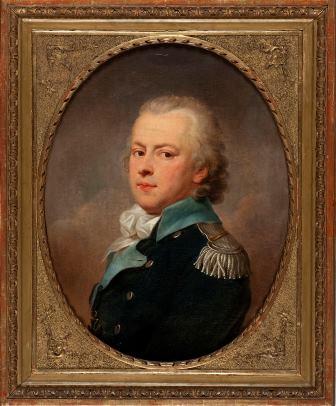 THE HAGUE, 10 April 2017 – The Restitutions Committee has advised Minister of Education, Culture and Science Jet Bussemaker to restitute a portrait by Tischbein from the Dutch National Art Collection to the heirs of the original Polish owner Count August Krasicki. The Minister has accepted the recommendation.

The painting Portrait of an Officer by J.F.A. Tischbein is part of the Netherlands Art Property Collection (NK 1715), which consists of artworks returned from Germany after the Second World War by the Allies.

The restitution application was made by a descendant of the Polish Count August Krasicki. He owned the Stratyn estate, where his son Stanisław lived with his family. The Applicant stated that he could clearly remember the painting from his youth. One of his ancestors is depicted in the work. This ancestor was awarded the highest military decoration in Poland.

In September 1939 Stratyn was overrun by the Red Army, which invaded Poland from the east. The Krasicki family had to flee. The painting thereafter came into the hands of Pieter Menten, who from 1941 was active in the same region as an SS-Hauptscharführer and appropriated art in various ways. On 3 April 1944 Menten sold the painting to Adolf Hitler.

The Committee came to the conclusion that August Krasicki lost possession of the painting involuntarily as a result of circumstances directly related to the Nazi regime. The Committee therefore advised the Minister to return the painting to the heirs.

The Advisory Committee on the Assessment of Restitution Applications for Items of Cultural Value and the Second World War advises about claims to items of cultural value lost during the Nazi period, also referred to as looted art. Since the Restitutions Committee was established in 2002 it has issued 147 recommendations and opinions and has had 169 claims submitted to it. The Committee is chaired by Fred Hammerstein.

The Restitutions Committee has advised Minister of Education, Culture and Science Ingrid van Engelshoven to restitute a pastel drawing from the Dutch National Art Collection to the heirs of the original owners. The Minister has accepted this recommendation.

The Restitutions Committee has advised the Minister of Education, Culture and Science (OCW) to grant a claim to the ice boat Sperwer. The ice boat was stolen from its Jewish owner during the Second World War.