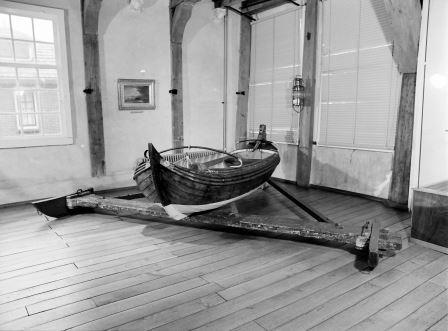 THE HAGUE, 15 July 2015 – The Restitutions Committee has advised the Minister of Education, Culture and Science (OCW) to grant a claim to the ice boat Sperwer. The ice boat was stolen from its Jewish owner during the Second World War. The object currently belongs to the Dutch National Art Collection and is in the Zuiderzee Museum in Enkhuizen. The Minister has accepted the advice and the ice boat will be handed over to the former owner’s family. As far as the Restitutions Committee is concerned this is an exceptional case because this is the first time it has given advice about an application for the restitution of an antique means of transport.

An ice boat has runners so it can sail over the ice. A 1908 magazine article describes the ice boat Sperwer, which was used as a pleasure craft, as ‘the fastest ice boat in Monnikendam’. At that time the Sperwer already belonged to a Jewish family from Monnickendam and it was handed down from father to son. The last owner and his family were transported to Westerbork on 27 May 1943. They were murdered in Sobibor just over a week later.

The family had put the ice boat into storage in Monnickendam, but in 1943 or 1944 the Sperwer was stolen by a member of the NSB (Dutch National Socialist Movement), who sold it to another NSB member. His son sold the ice boat to the Zuiderzee Museum in 1951.

The Restitutions Committee advises the Minister of OCW about the restitution of items of cultural value in the Dutch National Art Collection. A restitution application can only be granted if the original owner involuntarily lost possession due to circumstances directly related to the Nazi regime. In cases such as the present one, the Restitutions Committee advises in accordance with the standards of reasonableness and fairness, and this provides scope to weigh up the interests of the different parties involved.

In its considerations the Restitutions Committee took into account the fact that, according to the Minister, the ice boat is of great importance to the Zuiderzee Museum and to Dutch cultural heritage in general because there are only a few ice boats in museum collections. In the Minister’s opinion this ice boat fits into the Zuiderzee Museum’s collection better than any other because the Sperwer was used on the Gouwzee/Zuiderzee.

However, the Restitutions Committee takes the view that the interest of the applicants in the return of the ice boat must be given greater weight. The Committee also finds that theft by definition makes the loss of possession involuntary and that theft from a Jewish owner by a member of the NSB is a circumstance directly related to the Nazi regime. The Committee furthermore finds that the boat was in the family’s possession in any event since 1908 and that the family made attempts since the end of the nineteen-fifties to broach the loss of possession of the Sperwer.

Since January 2002 158 claims have been submitted to the Advisory Committee on the Assessment of Restitution Applications for Items of Cultural Value and the Second World War, which has issued advice on 136 occasions. Willibrord Davids has chaired the Committee since 1 January 2009.

Bronze candelabrum and situla back to heirs of Vita Israël

In a binding opinion issued on 13 July 2020 the Restitutions Committee decided that Rotterdam City Council should restitute a bronze candelabrum and a bronze situla to the heirs of the Jewish pharmacist Emanuel Vita Israël (1873-1940).

The Restitutions Committee is recommending restitution of two paintings by the artist A. von Stadler to Isay’s Jewish heirs on the grounds of new facts.

The Restitutions Committee has advised the Minister of Education, Culture and Science to restitute three paintings from the Dutch National Art Collection to the heirs of the original Jewish owner Joseph Henri Gosschalk.