Drawing in Rijksmuseum to go back to the heirs 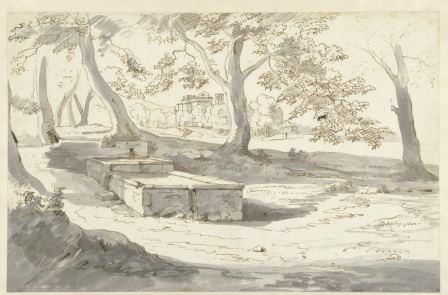 THE HAGUE, 26 September 2017 – The Restitutions Committee has advised Minister of Education, Culture and Science Jet Bussemaker to restitute a drawing from the Dutch National Art Collection to the heirs of the original German owner Michael Berolzheimer. The Minister has accepted this recommendation.

The drawing View of the Abbey of Grottaferrata by Caspar van Wittel was acquired at a sale in 1975 by the Rijksprentenkabinet (Rijksmuseum Print Room) on behalf of the Dutch State and it is in the collection of the Rijksmuseum Amsterdam. In 2016 heirs of Berolzheimer’s made an application to the Minister of OCW for restitution of the drawing. The Minister asked the Restitutions Committee to advise her with regard to this application.

It emerges from the recommendation that the original owner of the drawing, the Jewish lawyer Dr Michael Berolzheimer (1866-1942), fled Nazi Germany in the course of 1938. He eventually settled in the United States. After his escape his collection of drawings was put up for sale at the Adolf Weinmüller auction house in Munich. The drawing by Van Wittel was probably sold on privately by Weinmüller himself. In 1975 it went under the hammer at Mak van Waay in Amsterdam, where it was purchased by the Rijksprentenkabinet.

In its recommendation, the Committee concludes that Berolzheimer had to sell the drawing at auction as a result of the anti-Jewish measures in Nazi Germany. It is unlikely that he received the free disposal of the proceeds when the drawing was sold. The Committee considers the Applicants’ interest in restitution of the drawing to have greater weight than the importance to the Dutch State of retaining the drawing for the Dutch National Art Collection. The Committee therefore advises the Minister of OCW to restitute the drawing to the heirs of the original owner.

The Advisory Committee on the Assessment of Restitution Applications for Items of Cultural Value and the Second World War advises about claims to items of cultural value lost during the Nazi period, also referred to as looted art. Since the Restitutions Committee was established in 2002 it has issued 148 recommendations and opinions and has had 173 claims submitted to it. The Committee is chaired by Fred Hammerstein.