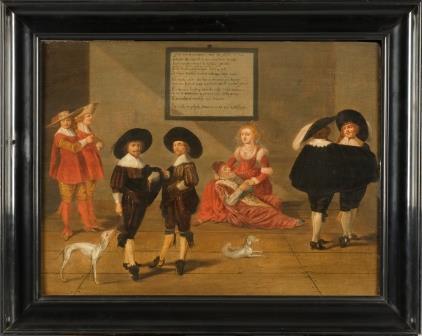 THE HAGUE, 5 August 2015 – The Restitutions Committee has issued a binding opinion about a claim to a painting in Museum Het Valkhof in Nijmegen. The work concerned is a seventeenth-century panel by Christiaen Coeuershof depicting ‘The Riddle of Nijmegen’. The painting has to be returned to the heirs of the former Jewish owner.

The former owner was the pharmacist and collector Emanuel Vita Israël (1873-1940). He had a large collection of paintings and antiquities, to which he gave members of the public access in period rooms in his home in Amsterdam. In 1932 he was furthermore involved in founding the Jewish Historical Museum, to which he lent various items from his collection. He committed suicide on 15 May 1940, shortly after the German invasion. The only members of his family to survive the war were a daughter-in-law and her two daughters.

Vita Israël had a provision included in his will that his collection of antiquities had to be auctioned off within six months of his death. His beneficiaries therefore had the collection sold at auction in November 1940 at the Amsterdam auctioneers Frederik Muller & Co. The painting of ‘The Riddle of Nijmegen’ was among the items auctioned off.

A difficult question in this case was whether possession of the painting was lost involuntarily as a result of circumstances directly related to the Nazi regime. Among other things the Committee’s investigation revealed that the obligation imposed by Vita Israël to have his collection sold at auction was not included in his will until mid-1939. This provision was not in his earlier will. Like the Applicants, the Restitutions Committee assumes that Vita Israël’s suicide was prompted by the German invasion, one reason for this assumption being that many Jewish Dutch nationals committed suicide immediately after the German invasion. Taking all these factors into account, the Committee came to the conclusion that there was involuntary loss of possession due to circumstances directly related to the Nazi regime.

In cases of binding opinions the Restitutions Committee advises on the basis of the yardsticks of reasonableness and fairness. This provides scope to weigh up the interests of the different parties involved. According to the Committee, the City Council’s interest carries little weight, although Nijmegen City Council acquired the painting in 1971 in good faith. Museum Het Valkhof stated that the painting by Coeuershof is the least important of all four depictions of ‘The Riddle of Nijmegen’ in its collection. The claimed work has furthermore almost always been in the repository.

Since January 2002 159 claims have been submitted to the Restitutions Committee, which has issued advice on 138 occasions. Willibrord Davids has chaired the Committee since 1 January 2009.

On 7 December 2020 the Committee for the Evaluation of the Restitution Policy for Cultural Heritage Objects from the Second World War, the Kohnstamm Committee, advocated in its report Striving for Justice a recalibration and intensification of the restitution policy by, among other things, changing the assessment framework.

The Restitutions Committee has advised Minister of Education, Culture and Science Jet Bussemaker to let an earlier decision to reject the Koenigs claim stand.

THE HAGUE, 24 May 2019 – The Restitutions Committee has advised the Minister of Education, Culture and Science to restitute […]