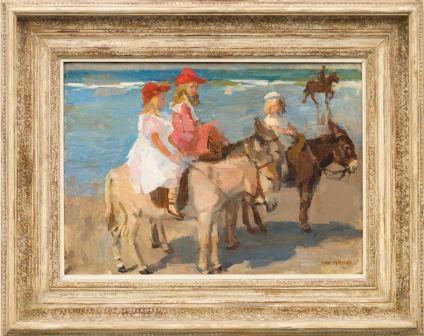 Children on the Beach by Isaac Israels (photo: Peter Cox)

THE HAGUE, 31 August 2016 – The Restitutions Committee has advised the Minister of Education, Culture and Science (OCW) to reject a claim to a painting by Isaac Israels. The Minister has accepted the recommendation.

The recommendation concerns the painting Children on the Beach by Isaac Israels, which is part of Museum Arnhem’s collection. After the Second World War the work was found in Velp in the home of a member of the German Sicherheitsdienst (Security Service). At the time the authorities suspected that the painting had come from Amsterdam but attempts to find the owner were in vain. In 1948 the painting was finally handed over to the then Arnhem Municipal Museum.

In 2014 the Minister of OCW received an application for restitution of the painting. It was submitted by the grandson of a Jewish resident of Amsterdam who was murdered by the Nazis during the war. It emerges from a written record that the grandfather did indeed own an Israels that was stolen by the Nazis, but nothing more is known about that work than the surname of the maker: Israels.

The Applicant bases his claim, among other things, on the fact that during the nineteen-eighties his father bought a reproduction of a well-known painting by Israels in the Rijksmuseum depicting children riding donkeys on the beach. According to the Applicant the reproduction reminded his father of the stolen painting, which he recalled from his childhood. Because the painting in Museum Arnhem closely resembles the original painting of the reproduction, the Applicant contends that the work in Arnhem has to be the one stolen from his grandfather.

Extensive research by both the Applicant and the Restitutions Committee has not unearthed sufficient information to be able to state that it is highly likely that the painting Children on the Beach is the painting stolen from the Applicant’s grandfather. The Restitutions Committee has therefore advised the Minister of OCW to reject the application. The Applicant refers to the scene depicted on the reproduction purchased by his father, but Isaac Israels made thousands of works, including several dozen paintings of children riding donkeys on the beach. There is therefore a reasonable chance that the work stolen from the grandfather is a different Israels.

It furthermore emerges from the investigation that two other Jewish families from Amsterdam made declarations after the war concerning the loss of a painting by Isaac Israels. As regards the description and dimensions, these two paintings match the work in Arnhem currently being claimed. Information about this matter will be published at the end of the year on an updated website of the Origins Unknown Agency.

The Advisory Committee on the Assessment of Restitution Applications for Items of Cultural Value and the Second World War advises about claims to items of cultural value lost during the Nazi period, also referred to as looted art. Since the Restitutions Committee was established in 2002 it has issued 145 recommendations and has had 165 claims submitted to it.

Relevant recommendation: Children on the Beach by Isaac Israels

The Restitutions Committee advised the Minister of Education, Culture and Science (OCW) to reject a claim to a painting by Salomon Koninck in the Dutch National Art Collection.