Bronze candelabrum and situla back to heirs of Vita Israël 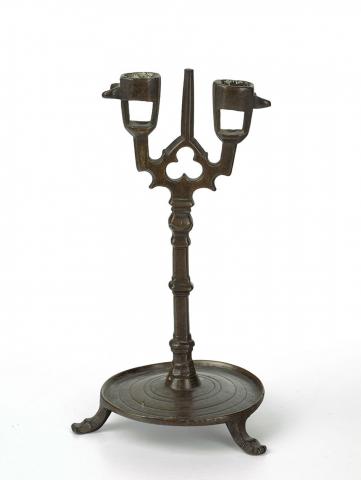 THE HAGUE, 27 July 2020 – In a binding opinion issued on 13 July 2020 the Restitutions Committee decided that Rotterdam City Council should restitute a bronze candelabrum and a bronze situla to the heirs of the Jewish pharmacist Emanuel Vita Israël (1873-1940).

Emanuel Vita Israël had a large art collection, to which he gave members of the public access in period rooms in his home in Amsterdam. He committed suicide on 15 May 1940, shortly after the German invasion. The only members of his family to survive the war were a daughter-in-law and her two daughters. Vita Israël had a provision included in his will, which was drawn up on 30 June 1939, that his collection of antiquities had to be auctioned off within six months of his death. His beneficiaries therefore had the collection sold at auction in November 1940 at the Amsterdam auctioneers Frederik Muller & Co. The candelabrum and situla were among the items auctioned off. The Committee assumed that Vita Israël’s suicide was prompted by the German invasion. The Committees take the view that, in conjunction with the cause of death, the obligation on the heirs to execute the aforementioned provision in his will and have the artworks sold at auction was involuntary as a result of circumstances directly related to the Nazi regime.

The candelabrum and situla were in the collection of Museum Boijmans van Beuningen. They were given to Rotterdam City Council in 1994 as part of the collection of J.W. Frederiks. The Museum took the initiative to contact Vita Israël’s heirs in 2018, after which it was decided to ask the Committee for a binding opinion.

The Advisory Committee on the Assessment of Restitution Applications for Items of Cultural Value and the Second World War advises about claims to items of cultural value lost during the Nazi period, also referred to as looted art. Since the Restitutions Committee was established in 2002 it has issued 163 recommendations and opinions and has had 185 claims submitted to it.

Relevant binding opinion: A bronze situla and a bronze candelabrum

The Restitutions Committee has advised Minister of Education, Culture and Science Jet Bussemaker to reject a claim to a part of the Koenigs collection which was returned from Kiev, Ukraine, in 2004.