Binding Opinion about ‘Moses’, a Sculpture Attributed to Alessandro Vittoria 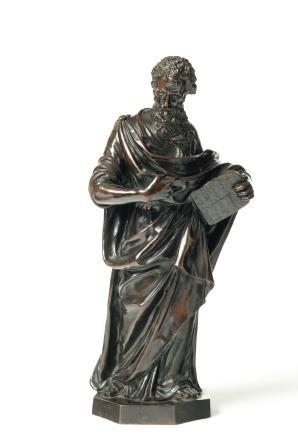 The Hague, 31 May 2018 – The Restitutions Committee has issued a binding opinion about the application for restitution of ‘Moses’, a sculpture attributed to Alessandro Vittoria and currently in the possession of Museum De Fundatie in Zwolle. The Committee has advised the museum to restitute the bronze figure to the heirs of Emma Budge.

The sculpture was acquired during the 1948-1952 period by Dirk Hannema, the founder of Museum De Fundatie. He obtained the work from his cousin Charles Hubert ridder de Stuers. Hannema donated the sculpture to the museum in 1964.

Previously the figure had been part of the art collection of Emma Budge, who was Jewish and from Hamburg. In response to the rise of the Nazi regime, starting in 1933 she made changes to her will in which she spelled out what should happen to her art collection after her death. Emma Budge died in 1937. That same year the sculpture was sold, together with hundreds of other artworks from the estate, at the Graupe auction house in Berlin. The Committee has concluded that the loss of possession of the sculpture by Budge’s estate should be designated as involuntary, caused by circumstances directly related to the Nazi regime, and has advised the museum to restitute the work to the heirs. The Committee does not consider it plausible that the heirs had free disposal of the proceeds.

The Advisory Committee on the Assessment of Restitution Applications for Items of Cultural Value and the Second World War advises about claims to items of cultural value lost during the Nazi period, also referred to as looted art. Since the Restitutions Committee was established in 2002 it has issued 155 recommendations and opinions and has had 174 claims submitted to it.

The Restitutions Committee has advised the Minister of Education, Culture and Science (OCW) to grant a claim to the ice boat Sperwer. The ice boat was stolen from its Jewish owner during the Second World War.

The Restitutions Committee has advised Minister of Education, Culture and Science Jet Bussemaker to restitute a painting by Jan van Goyen in the Dutch National Art Collection to the daughter of its Jewish owner.